Seven years ago this fall, I wore a hard hat and safety vest to visit The Nature Conservancy’s Port Susan Bay Preserve as a major estuary restoration project was underway. 150 acres of former estuary was about to be returned to the tide, to support juvenile salmon as they transition to salt water, juvenile Dungeness crab, and a host of other estuary-dependent species.

This fall, our neighbor in Port Susan, the Washington Department of Fish and Wildlife (WDFW) is about to open 250 acres to the tide, young salmon and crab at the Leque Island unit of the Skagit Wildlife Area. I have goose bumps again looking at the weather reports, hoping the construction team have enough dry weather to complete their jobs. 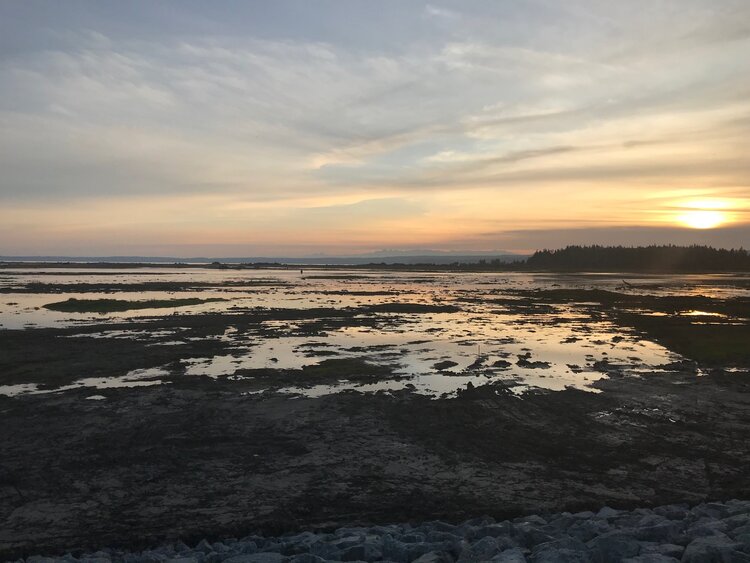 Under beautiful blue skies on October 14, 2019, the levees were pulled back, opening new channel habitat that was sculpted across the site in 2018 to give the restoration a head start. Like the restoration at our Port Susan site, this moment has been a long time coming. When I first started working for the Washington Chapter in 2005, the Leque restoration was already being discussed at public meetings.

Leque Island, located west of Stanwood between Port Susan and Skagit bays, was once entirely salt marsh. Today it consists of wetlands and previously farmed fields surrounded by perimeter dikes. The Washington Department of Fish and Wildlife (WDFW) began acquiring properties on Leque Island in 1974, and currently owns the entirety of the island. The Leque Island Unit is part of the Skagit Wildlife Area.

Beginning in July 2019, WDFW and partners are in the midst of constructing the Leque Island Estuary Restoration Project. Removing over 2.4 miles of levee is restoring 250 acres of tidal marsh habitat in the Stillaguamish River watershed where 85 percent of historic tidal marsh has been displaced. Estuaries are important for juvenile Chinook salmon as they transition from fresh to salt water, as well as shorebirds, waterfowl, and a host of other species in the area. Because Puget Sound’s southern resident whales rely upon Chinook salmon for food, the project is also closely aligned with Orca recovery efforts.

The Nature Conservancy has supported our neighbor’s project through the years. As WDFW launched a community outreach process around this project in 2013, TNC partnered to bring hundreds of thousands of dollars to the design and construction through grants from the National Oceanic and Atmospheric Administration and as one of suite of Stillaguamish projects on the first Floodplains by Design project list.

The legacy of conservation work in Port Susan is a strong and proud story. It includes a broad community engagement of many interests from recreation to farming, flood risk reduction and salmon recovery. Two years ago, an 88-acre project was completed on the Stillaguamish Tribe’s Zis-a-ba property at the end of the Old Stilly Channel and roughly in between the Conservancy’s Port Susan preserve and WDFW’s. So, in the spring of 2020, there will be a total of 488 acres of restored estuary habitat available to the young Chinook salmon traveling down the Stillaguamish to make their way into Puget Sound and beyond that were not there in 2010. There is a lot for the partners in the Lower Stillaguamish to celebrate.

And yet, the sense of urgency remains to don hard hats and link arms across the community again to ensure recovery of our iconic Puget Sound salmon before it is too late.